A couple of weeks ago I met Susan Sleeman online.

She has a new book, No Way Out, and I offered to read an advance copy for her, and I'm so glad I did.

No Way Out grabbed me on the first page. I was riveted to the story of Alyssa Wells and Cole Justice. Alyssa is a widow with two young children. One night while on a run she overhears her dead husband’s police partner admit to being part of a meth ring and killing her husband. As she hurries away, she slips and the bad guys are after her.

After two tours in Iraq, Cole Justice is back in the states working as a private investigator. He’s out on the beach the night Alyssa runs for her life. He helps her to hide and then begins to protect her and the children while investigating.

I loved the characters in this book. Cole’s family is great at working together and loving each other. Alyssa’s children are adorable and believable. Cole and Alyssa face many obstacles in a short time and learn to rely on each other.

I don’t think you’ll be disappointed with this story. It’s fast pace and emotional, and the characters seem real.


Susan did give me a pre-publication advance copy of her book to review before it was for sale in stores, but I’m under no obligation to review it and say nice things about it.

I liked it so much, I'll be looking forward to Susan's next book.


Over the past week our country has take some hits from evil people. I've found I couldn't tear myself away from the TV as the authorities searched for the younger brother, Dzhokhar Tsarnaev. What an amazing story as the cops worked tirelessly to capture him.

Today I wanted to take a look at some good things going on in our world.

When Dzhokhar was captured, the people in the neighborhood lined the streets and clapped for the police as they drove away. How awesome is that?

We can't all be that heroic, but if we open our eyes to the world around us we'll notice good things happening.

Last night we were out walking and Brooke, three years old, wanted to get wet from a sprinkler watering her front yard. The sun was going down, and it grew cool, but the thrill of getting hit by the cold water didn't dampen her enthusiasm.

So of course, she wanted to share the joy. She asked my husband, Sparky, to get wet with her. Before you know it, we'd all gotten wet except the baby. Brooke's joy was contagious.

Today a man left our store and thought he'd written a check for a dollar less than he owed us. He called back to check.

One of the employees at my store left a bag of food she'd paid for at the grocery. One of the grocery store clerk's recognized her and brought it to Drug Mart. 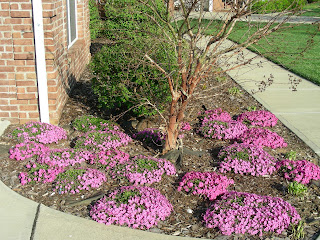 Keep your eyes open for the beautiful people in your world today.

I rarely watch golf on TV, but my husband likes to watch The Masters. We were babysitting, and I played outside with Brooke. Tim took baby Allie inside to watch the match wrap up.

By the time Brooke and I came inside it was down to Adam Scott and Angel Cabrera in a dramatic playoff.

These days so many athletes are self-centered and only look out for their best interests. Yesterday was an example of good sportsmanship at it's best.

It took two playoff holes to determine a winner. It was pouring down rain in Augusta which, of course, made it harder to play. On the last hole the men hit their balls and after Adam Scott made one shot, Angel Cabrera gave him a thumbs up sign. This may be a good time to mention Scott is from Australia, and Cabrera is from Argentina. They don't speak the same language. After the thumbs up, Scott looked at Cabrera and returned the gesture.

In the end Adam Scott won, and do you know what Cabrera did? He didn't hang his head or storm off the green. He walked over to Scott and hugged him. Not a little hug, but a big old bear hug. The the caddies hugged the golfers. It was a sweet moment in golf and in the sporting world.

I think the last thing Cabrera was reported to have said on his way to the car was, "God gives and takes."

Yesterday both of these men were classy and a great example to all athletes.


On a sad note, the death and destruction at the Boston Marathon today broke my heart. My prayers go out to those in the race, the spectators, and the people of Boston. I've already heard about heroes today like the doctor standing beside six other spectators hurt in the explosion. He was able to help them immediately. The news showed physicians, paramedics, firemen, cops and others in uniform helping the wounded. I know there are people still working to find the person behind this tragedy. All of these people are in my prayers.
at April 15, 2013 1 comment:

One of my earliest memories was of participating in the summer reading program sponsored by the Owensboro, KY public library. The more books you read, the more stickers you'd get. I filled my card.

I remember enjoying mystery books even at a young age, and books about animals. But my favorite book as a young child was, The Best Loved Doll. It is a sweet story about a girl, Betsey, choosing which doll to take to a party. She has many to choose from, but she decides on the doll she loves best. It's not the newest or prettiest doll, but this doll has stood the test of time.

The moral of the story is true beauty is on the inside.

I can't wait to share this book with Brooke and Allie one day.

As I got older, I devoured Nancy Drew books. The first two books I read where my moms, and I was hooked. After that I saved my money, and every time we went to Louisville, mom would take me to the bookstore to buy another one.

I spent hours at the library checking out books on Nurse Nancy, actually any nursing books drew my attention. I also read The Bobbsey Twins and Trixie Belden.

My friends and I got so hooked on The Three Investigators, that we started a club and named ourselves, The Four Investigators. You can't imagine what all we did trying to find a mystery to solve.

I'm happy to say I've passed the love of reading on to both of my sons.

What about you? Do you have any favorite books you remember?
at April 10, 2013 No comments:

End of a decade


I no longer have a teenager. Twenty years ago I gave birth to a ten pound AND four ounce bundle of joy, Scott Kennady Layton.

He challenged us continually, but it was always a joy. He caused me to think harder and work harder. Actually both of my sons did that. I'll tell anybody who asks that they are both smarter than me, because they are.

My boys were born twelve years apart. So you might think we tended to baby the youngest. Not so.

My dad said the day Scott discovered Bill, my oldest son, wasn't another parent was the day my troubles started. Ha!

Once Scott thought they were on a level playing field, he began to think he could do anything Bill could do.

The day after his first Christmas he began to walk. Eight months old and he was off and running.

He hated to see Bill leave in the mornings for school, and he loved to see him come home. Many times he'd rather hang out with Bill and his friends than kids his own age. Thank goodness Bill was a great, big brother.

My husband, Bill, and Scott all love sports. The boys tried out every sport offered through the years, and somehow they both settled on tennis.

By the time Scott began playing tennis, Bill was married and working. But Bill still found time to play tennis with Scott. As Scott grew better in tennis, he became more of a challenge to Bill. Now here's the thing, neither boy likes to lose. I mean, they are really competitive. So Scott eventually began to think he could beat Bill. Every time he'd come home and had lost, he'd be mad. Seriously. Now don't forget Bill's working full time, and Scott's in high school. Scott is in tennis clinics and playing in tournaments all over Kentucky. Bill knows the day is coming when he'll lose, but he fights. Bill comes close to losing but manages to prevail. And at last it happens. Scott wins.

And deep down, do you know who I think was the proudest of Scott's achievement? Bill.

Scott's in college and plays tennis for Asbury University. He's trying different things and wants to discover the path God has for him. I've got a glimpse of where I think he's headed, but he's only twenty.

This next decade should be as exciting as the last.

I hope you all have a great week! 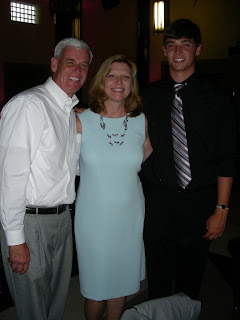