Growing up I remember hearing my mom talk about a Ginko tree with my grandmother and Aunt Judy. I thought it had an interesting name and pretty leaves, but I didn't pay much attention to the conversation.

It turns out it a Ginko tree can live up to 1,000 years or more. Scientists think it's been around since the dinosaurs.

Have you seen Ginko Bilboa in the vitamin aisle? It is extracted from the leaves and is a supplement believed to improve memory and blood flow. (It can interfere with some prescription drugs, so don't take it without consulting your doctor or pharmacist. ) 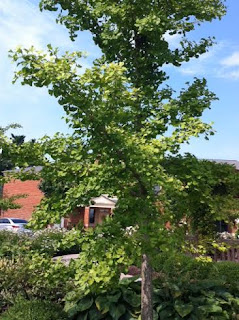 The leaves have a unique shape, and the Ginko is a single species with no known living relatives. In the fall they turn a pretty shade of yellow. 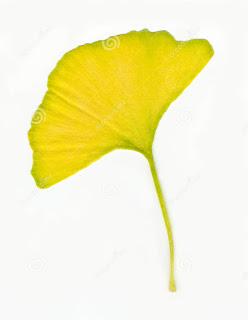 The seed of the female tree stinks, but the male tree does not smell bad. So if you decide to buy one of these tree from a nursery, make sure it's a male. My research revealed you can find Ginko trees in New York City, and the city made sure to buy male trees.

I'd love to hear if you've seen a Ginko tree before.

Email ThisBlogThis!Share to TwitterShare to FacebookShare to Pinterest
Labels: Ginko

I spotted this flag in North Carolina. The setting makes me want to sit down on the front porch with a big glass of sweet ice tea. 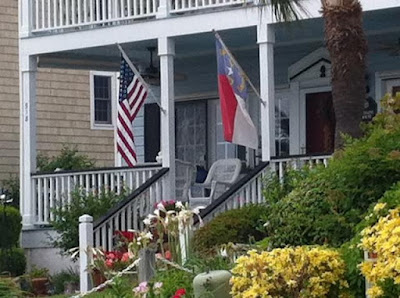 "This flag, which we honor and under which we serve, is the emblem of our unity, our power, our thought and purpose as a nation. It has no other character than that which we give it from generation to generation. The choices are ours. It floats in majestic silence above the hosts that execute those choices, whether in peace or in war. And yet, though silent, it speaks to us — speaks to us of the past, or the men and women who went before us, and of the records they wrote upon it."
at July 26, 2015 3 comments:


If you've read a decorating magazine in the last year you're bound to have seen at least one article on using reclaimed wood for a project.

This week, I bought a bird house made from reclaimed wood.

A friend's husband gathered some scraps of wood around his home and built this for me. Some is from an old barn, and some came from a fence. I don't think he considered the trend of using old wood for a new project. He was being thrifty and creative. 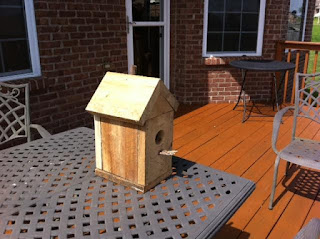 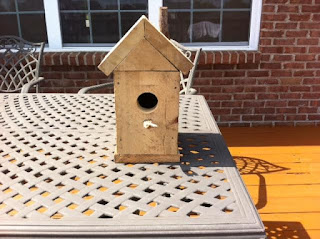 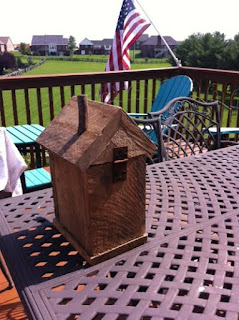 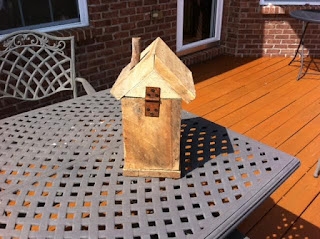 Who knows? Maybe the trend of reclaiming old wood came from a practical and thrifty man, like Woody. Yes, that's his real name. Woody Sparks.

Have a great day!

This week's flag flies proudly over Wesley Village in Wilmore, Kentucky. The village is home to many wonderful senior adults. 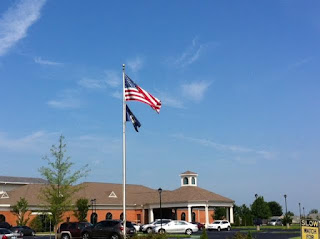 We moved to Kentucky in 1994 when the first shovel of dirt was dug at Wesley Village. They've come a long way in that time. The village is Kentucky's first CCRC (Continuing Care Retirement Community) and offers all levels of independent living and licensed health care in a wide variety homes and apartment settings.

They are a non-profit Christian community and host the first small home in the state. The village's mission is "Celebrating Life in Christian Love!" 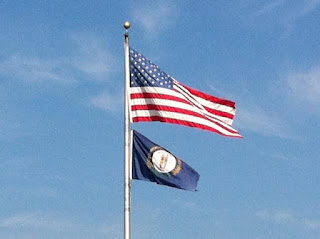 When you were young, did you color pictures of barns? Were they always four straight walls and a roof? Were they black or white?

Next time you're driving through the countryside, look around at the different barns. You'll see barns of many different colors, sizes, and purposes. 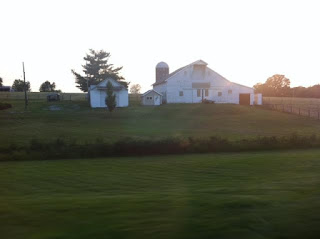 I've discovered barns have different personalities. Some barns lean so far left or right, I don't see how they remain standing. Some have missing slats of wood, and some are faded and in desperate need of a new coat of paint.


My grandparents, Elizabeth and Jack Hubbard, lived on a farm in Munfordville, KY. They had two barns. When I was eight years old, my brother, Chris, and I spent the night with my grandparents on New Year's Eve.

Granddaddy went to bed about 8:00, his usual bedtime. Grandmother never wanted us to be bored, and she knew we wanted to stay up until midnight. We'd never done this before, and she agreed. I don't know if she thought we'd fall asleep, but Chris and I were determined to stay awake until the new year. Plus I think we were shocked Grandmother would let us, and we wanted to see how that would play out because she usually went to be early.

So Grandmother pulled out puzzles and snacks. When it got close to midnight, she told us she'd always heard that at midnight of the new year cows get up, turn around, and lay back down. This was too much for us to resist. We had to see if it was true.

Right before midnight, we bundled up in our heavy coats and walked out to the barn giggling along the way. When we got close, Grandmother warned us to be quiet. We crept into the barn with a flashlight.

The cows filled the penned in area. All were sleeping. We stood there for a few minutes. Expectation warred with disappointment. Finally, one cow in the middle stood up and looked around.

Then another cow stood up. And another stood. One mooed. Before long it seemed as if every cow was up and mooing. They shifted around, and one by one lay back down.

My heart raced. I couldn't believe Grandmother Hubbard had stayed up until midnight, taken us to the barn, and we stood there watching the cows wake up, move, and go back to sleep.

Chris and I laughed all the way back to the house.

I've celebrated a lot of New Year's Eves since I was eight years old, but this was the most magical.
at July 17, 2015 2 comments: 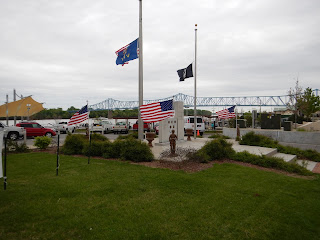 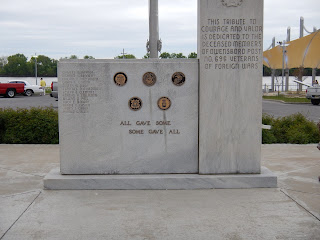 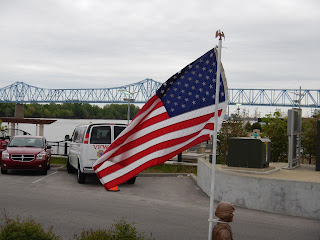 I saw this in Owensboro, Kentucky.
All
Gave
Some


Masons from Ireland and Scotland came to Kentucky and built stone fences, buildings, and other structures in the 18th and 19th centuries. Many of these masons taught their slaves this trade before the Civil War.

After the war, the freed slaves taught the skill to other free African-American craftsmen.

Over the years many of the fences have disappeared to road construction and neglect. Pleasant Hill still has at least twenty-five miles of rock fences on Shaker property. These fences were needed to keep livestock separated to maintain the integrity. After time, farmers found different ways to keep the livestock in separate areas, and rock fences were no longer constructed.

If you drive on the back roads in Kentucky, keep your eyes open. You may see one of these beautiful fences. 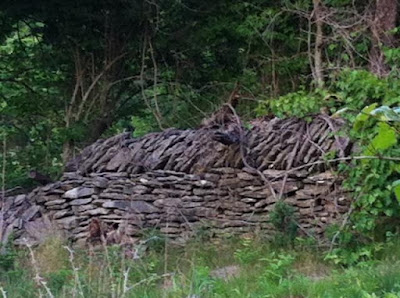 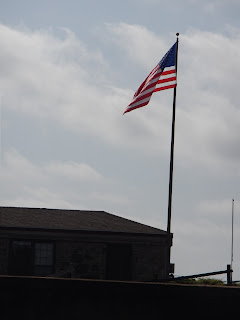 Some people come into your life for a season. We live near Asbury Theological Seminary, and meet many people for a season. The Hogan family came when Bill retired from the Air Force, and we grew to love their family. I learned so much from Bill's Bible studies and his preaching. No doubt God's hand is on him. His wife, Rona, and I shared many laughs and a few cries through the years in our women's group. I enjoyed watching Kylie and Kasey growing up, and I still miss their family.

America: Land of the Free, and Home of the Brave. The land our forefathers died for. The nation our fathers, mothers, sisters and brothers fight for. Yes, there have been men and women that stand beneath it who have misused it, but they are just that: people. We as people can choose to dismiss this flag as an outdated propaganda tool used to manipulate our sense of patriotism in order to achieve something less honorable. Or, We the People can choose to hoist it high and acknowledge that while men grow and wither like grass of the field, ideals and values can guide and check generations of us to become better versions of ourselves. I believe that America can have a bright future, but that choice lies in the hands of us, the people. We as individuals have a right to stand up for our beliefs, but we can do so without lashing out at others. And life is difficult, but don't let that stop you from striving to be something more. Even if you aim high and miss, it's better than never aiming at all. I hoist this flag over my head because to me, it symbolizes a desire to learn from the past, be aware in the present, and strive for a bright future. Call me a patriot, romantic, optimist, or naive fool. But at least call me an American. God bless America. ‪#‎independenceday‬ ‪#‎letfreedomring‬

Thank you Kasey, and thank you Bill for serving our country! 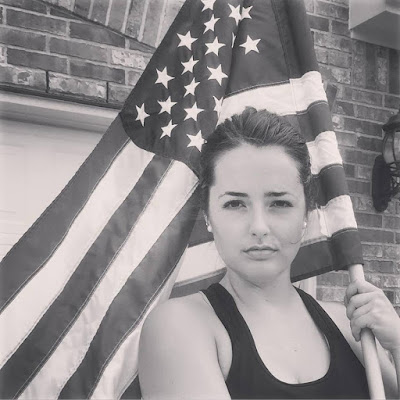 Last year was the first time I ever heard of a Tough Mudder race. I discovered it's not just a race, and it's not only a race in the mud, but it's a race in the mud with OBSTACLES. Monkey bars, rope climbs,and scaling walls are just a few of the possible obstacles. I didn't want to know much more because after a certain age, it's no use to try to talk your kids out of something.

Their website says, "Tough Mudder is not a race, it’s a teamwork-oriented challenge that puts camaraderie over course time." They also donate a portion of the proceeds to the Wounded Warrior Project.

Last year both of my sons signed up to participate in the race in Nashville. A storm did so much damage to the course that weekend the boys had to sign up for another race.

Luke Embree and Kenny Shifflet teamed up with Bill and Scott to compete in this year's Tough Mudder at the Kentucky Speedway. Here they are before the race. 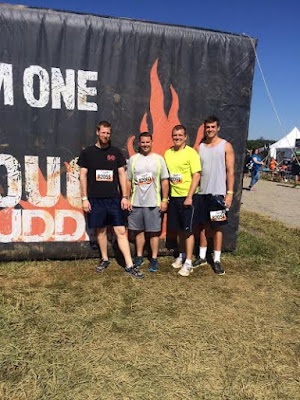 They had a goal to complete the race in three hours. Despite every member of the team cramping at some point, they finished in two hours and forty-five minutes.

Scott didn't know Luke and Kenny very well before the race. To finish they stuck together, encouraged each other, and physically helped each other. Here's one more picture at the end of eleven grueling miles. Still standing and still smiling. I'm so proud of these guys and all the people who participated in the Tough Mudder this year. 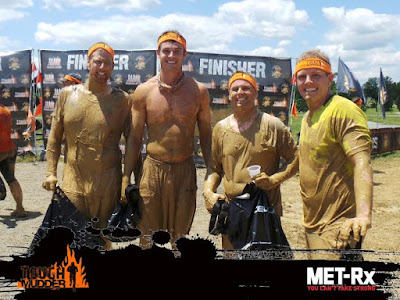