I understand many of the reasons:

1. Spread out the spending makes it easier on the budget.
2. Spread out the shopping so you're not stuck in long lines the days before Christmas.
3. All of the Christmas parties take away time from preparing for Christmas.
4. Thanksgiving is late this year. Not as many days between it and Christmas.


I know there are many more reasons, but these seem to be the main ones I hear.


So I guess as long as we slow down and remember to thank God for all of our blessings, that's the main thing.


As for me, I still plan to wait until the weekend after Thanksgiving. 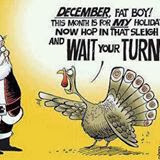 Q is for Queen Elizabeth

Tim, Scott and I took a weekend trip to London, England during our visit to see Scott in Spain.

Scott booked our plane tickets on an airline where we could only take a backpack. That's it. I'd already blown the electricity out at the hotel in Sevilla when my converter didn't work on my hair dryer. So I wouldn't need to pack a hair dryer or curling irons.
I discovered one secret to packing for a weekend without much space was to layer your clothes. I wore jeans, t-shirt, sweater, and jacket tied around my waist. 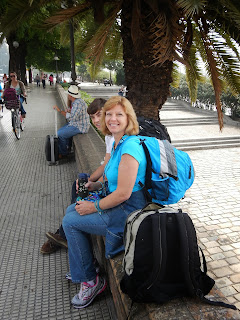 I was not prepared to fall in love with London. The place is charming, and we all want to go back one day when we have more time to explore.

We mostly visited outdoor sights because we didn't really have time to tour, but we saw a lot of different things.

One of the amazing sights we saw was Big Ben. It turns out it's Elizabeth Tower and Big Ben is the name of the massive bell inside the clock tower. (It weights more than thirteen tons. No wonder they call it big.) 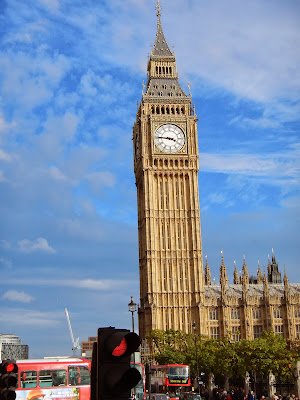 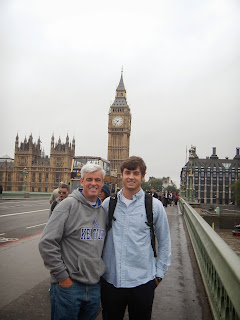 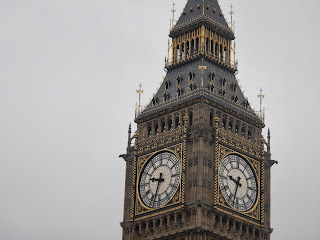 I hope you've enjoyed visiting Spain and London with me. It's been such an exciting time of my life.
at November 15, 2013 1 comment:

One of the most beautiful sights we saw in Sevilla was the Plaza de Espana. 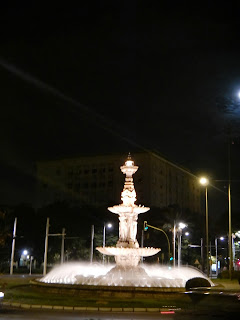 It's so pretty we visited it in the evening and the day. 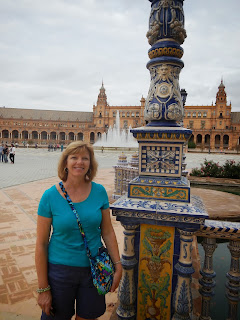 Notice all of the beautiful tiles. 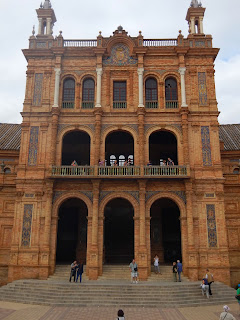 We saw lots of beautiful sights in Sevilla, but seeing Scott was the best! 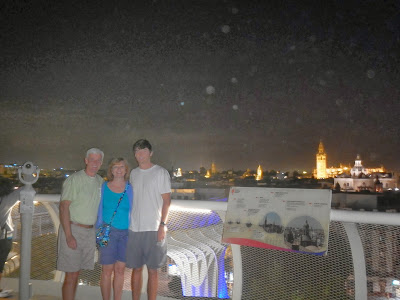 
Bull fighting is a popular sport in Spain. Tim and I toured the bull fighting arena in Sevilla.

The Plaza de Toros de la Maestranza is on the main street in Sevilla across the road from the river. 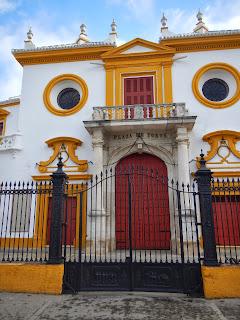 The arena holds about 12,000 people. The lower seats in the shade go for the most money.

Your ticket buys you the opportunity to see three bull fighters (toreros) fight six bulls in about three hours.

Each torero has a team of five other men. Two on horseback antagonize the bull with long spheres. Then the other three men stab the bull with knives. (This is the way I interpreted what our guide told us.) By now these five assistants have got the bull good and mad so the crowd and judge can see a good fight. I'm so glad the fighting season was over by the time we arrived in Sevilla. It seems like a gruesome sport. The owner of the arena gives profits to charity which is super nice.

Toreros can make almost no money per fight when their career starts to $300,000.00 per fight. They may have one hundred fights per year.

This got Tim to thinking. (You know he's into raising money for ministry.) If he could learn how to fight a bull, it wouldn't take a lot of fights to raise money for the next phase of Wesley Village or pay off the building debt at our church. 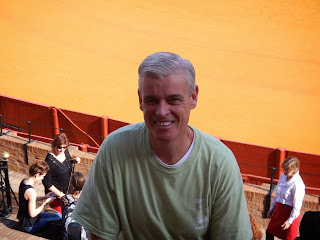 I'm usually supportive of whatever he wants to tackle, but I'm drawing the line at bullfighter.

Have a great week.

One of my favorite things about Sevilla was eating outdoors.

Most of the restaurants had very little indoor space and plenty of tables outside.

Three mornings we ate at a bakery outside. This bakery is just steps away from the apartment where Scott lives. 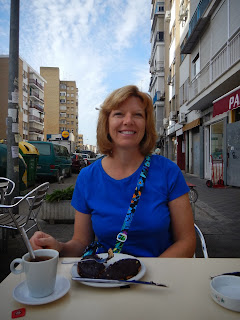 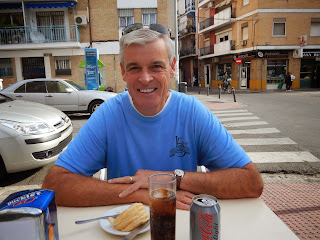 This was a nice Italian restaurant where we had lunch with Scott one afternoon when he finished classes. 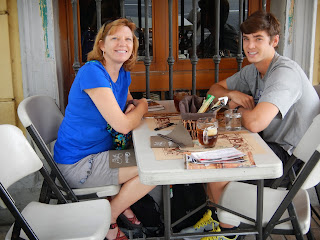 I enjoyed all of the foods we tried while in Sevilla. I enjoyed the relaxed atmosphere. The waiters never rushed you even when you were obviously finished eating. In Sevilla meals seem to be about more than food, it's a time to enjoy being together. 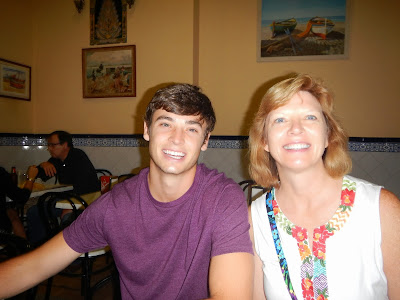