Last week Tim, Scott, and I traveled to New York City. We spent a couple of days touring the city before enjoying the first three days of the U.S. Open.

What trip to New York would be complete without a visit to the Statue of Liberty? We got up early and rode the subway as far as we could go and then hopped on a bus to get to the ferry taking us over to the island.

The closer we got, the more excited I became.

Edouard de Laboulaye from France, first came up with the idea to give a monument to the United States as a gift. It took ten years until Frederic Auguste Bartholdi was commissioned to design the statue in time for the centennial celebration of the Declaration of Independence. An agreement was reached that the Americans would build the pedestal, and the French would build and assemble the statue.

Both countries had problems raising money to support this endeavor. While raising the money, Bartholdi contacted Alexandre Gustave Eiffel to help engineer the skeletal frame.

In America, Joseph Pulitzer used the editorial pages of his newspaper to garner support for the fundraising effort.


The statue didn't make it in time for the centennial celebration, but the dedication occurred on October 28, 1886. It became a national monument on October 15, 1924.

I can't help but wonder how many people immigrated to the United States looking at the Statue of Liberty. How did they feel? Did a sense of freedom flow through them at the sight? 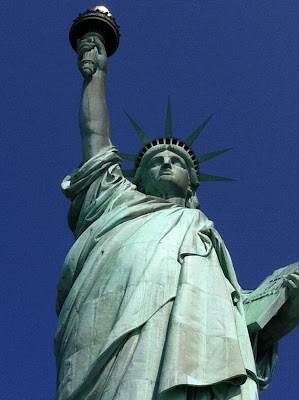 I'm proud to be an American, and I love living in the United States of America.